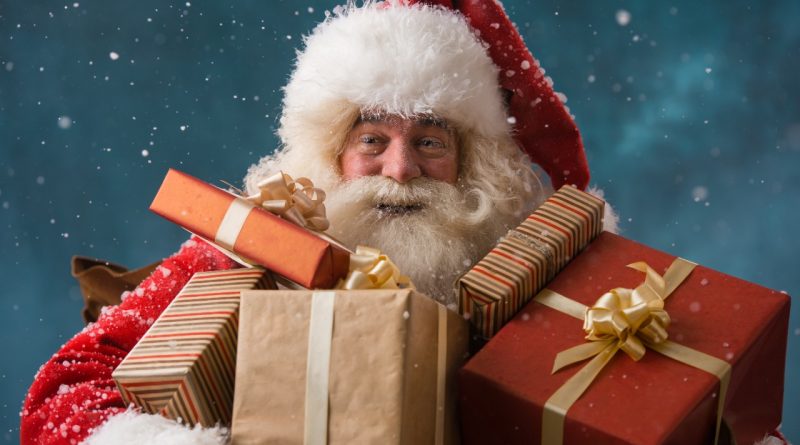 The history of the jolly gift bearing old man of Christmas dates back centuries, but Père Noël is a relatively late addition to the festive scene in France.

Let’s look how Père Noël, Father Christmas, came to have his own department in the post office in France and become one of the most popular characters in the country. The history of Santa Claus, or Father Christmas, dates back to the 4th century, when a priest from the area that is now Turkey came on the scene. He was known for his generosity and is said to have performed miracles. He eventually became Saint Nicholas, the protector saint of children.

The legend evolved over the centuries that on December 6th, St Nicholas would descend from the sky on his donkey (or sometimes on a white horse), go into houses by way of the chimney and leave gifts for well-behaved children.

The children would leave their shoes, in those days wooden clogs called sabots, by the fireplace with some carrots or apples for St Nicholas’ donkey (who was called Gui, meaning mistletoe).

Gui would eat his snack and then St Nicholas would leave some sweets in the shoes for the children to discover the next morning.

Sometimes he was accompanied by a less kind character, Father Whipper (Père Fouettard) who would punish the bad children.

Père Fouettard is a character who accompanies Saint Nicholas on his rounds during Saint Nicholas Day (6 December) dispensing lumps of coal and/or beatings to naughty children while St. Nicholas gives gifts to the well behaved.

He is known mainly in the far north and eastern regions of France, in the south of Belgium, and in French-speaking Switzerland, although similar characters exist all over Europe. This “Whipping Father” was said to bring a whip with him to spank all of the naughty children who misbehaved.

The most popular story about the origin of Le Père Fouettard was first told in the year 1150. An innkeeper (or in other versions a butcher) captures three boys who appear to be wealthy and on their way to enroll in a religious boarding school. Along with his wife, he kills the children in order to rob them.

They drug the children, slit their throats, cut them into pieces, and stew them in a barrel.

St. Nicholas discovers the crime and resurrects the children. After this, Le Père Fouettard repents and becomes St. Nicholas’ partner.

Although traditional portrayals clearly show a white old man in a black robe, communities have seen a rise in grown men donning blackface, claiming that it is just dirt. In these more recent representations, Le Père Fouettard are identical to the Dutch character Zwarte Piet (Black Peter) and Central Europeas character Krampus, an anthropomorphic figure described as half-goat, half demon.

Krampus is one of the companions of Saint Nicholas in several regions including Austria, Bavaria, Croatia, Hungary, Northern Italy including South Tyrol and the Trentino, and Slovenia. The origin of the figure is unclear; some folklorists and anthropologists have postulated it as having pre-Christian origins.

In traditional parades and in such events as the Krampuslauf (English: Krampus run), young men dressed as Krampus participate. Such events occur annually in most Alpine towns. Krampus is featured on holiday greeting cards called Krampuskarten.

The present-day version of Saint Nicholas started to take shape in New York in the early 1800s. A book was published as a New Year’s gift for children which contained a poem called, Old Santeclaus (Sinterklaas being the Dutch name for Saint Nicholas). In the poem, Santeclaus was an old man who delivered gifts to children on a sleigh pulled by reindeer.

In 1823, the poem, The Night Before Christmas firmly embedded the image of St Nicholas, or Santa Claus, in the American imagination. This poem gave the reindeer their names and made St Nicholas, a jolly chap with “a little round belly that shook, when he laughed, like a bowlful of jelly!” Thomas Nast, an illustrator for Harper’s Weekly magazine, drew a series of illustrations for Christmas based on these ideas and gave the public a real glimpse of Santa Claus. Nash is also responsible for establishing Santa’s home as the North Pole.

But the real public relations boost for Santa came in 1931 when Coca-Cola gave Haddon Sundblom the task of finding a symbol for their Christmas advertising campaign. He looked to the earlier illustrations of St Nicholas, accentuated his jolliness, and dressed him in red and white – the colours of Coca-Cola. Up until this time Santa had a variety of clothing in his wardrobe. He had been seen in many outfits, including the now famous red suit with white fur, and patriotic stars and stripes. But because of Coca-Cola’s very effective marketing, their version of Saint Nicholas became the American Santa Claus.

And this is the Santa who came to France after the Second World War, along with other American products such as Coca-Cola and chewing gum. He’s known in France as Père Noël (Father Christmas) and he brought with him the commercialisation of the Christmas holiday.

The Catholic Church, which was still quite strong in France, took a dim view of this jolly fellow’s arrival. Up until the 1950s, the nativity scene had been the symbol of Christmas and they wanted to keep it that way.

The religious leaders were especially upset by the fact that Père Noël and his Christmas tree were allowed in French schools, while Nativity scenes were banned.

France being a country where church and state are separate, allowed no religious symbols in the schools. But since neither Père Noël nor Christmas trees (sapin de noël) were religious symbols they were permitted. Feelings ran so high that in 1951 an effigy of Père Noël was burned in front of the cathedral in Dijon, Burgundy. It didn’t stop the colourful character’s popularity growing in France.

Père Noël is known and loved all over the country. He even has his own department in the French post office to handle all the letters received at holiday time. The position, Secretary of Père Noël, was created in 1962 in the “dead letters” department of the post office in Paris. Today, all letters addressed to Père Noël go to Libourne, in south-west France, where each and every one is answered with a postcard – by law

A staff of 60 secretaries handles his correspondence and in the years since the department’s creation, the number of letters has gone from 5,000 to 1.4 million letters (and emails) per year.

No matter what address is on the letter, it will end up in the hands of Père Noël’s secretary.

But the world is changing, and Père Noël has to keep up with the times and in 2009 the postcard was updated. Now children are invited to go to Père Noël’s website to play interactive games and send an email with their list of desired gifts.

But for those who still want to write letters, big red special delivery post boxes appear around French cities at holiday time, just for those letters to Père Noël.

Féve is French for Fava Bean.    But the term is used to describe any small trinket baked into epiphany cakes.